Skip to content
April 20, 2018 joebiba
This month, Creators of Hope will take a look at the environment and how it shapes life for Jamaica’s rural poor. We’ll also consider the other way around: the effects that poverty can have on the environment.

As an island nation, Jamaica is especially vulnerable to environmental and weather-related events. In this way, it’s similar to those parts of the coastal U.S. where low-income neighborhoods can be at the mercy of the elements.

When we think about the impact Hurricane Katrina had on New Orleans, especially in the poorest parishes that experienced the worst flooding from Lake Pontchartrain’s failed levees, we can see how poverty increases the chances that extreme weather events can destroy a community. Storms of Katrina’s size and strength can wipe out entire districts of houses and businesses. 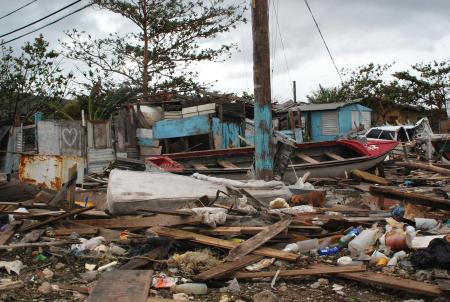 Hurricane Dean hits Jamaica, 2007.
When communities don’t have the resources to rebuild, the damage becomes permanent, and those districts are abandoned.

Jamaica’s position in the Caribbean makes it vulnerable to hurricanes and tropical storms. Rising sea levels hit small island nations hard and fast. The kinds of extreme weather events we’ve seen happening more often, from Hurricane Sandy in 2012 to the East Coast’s “Snowmageddon” of 2016 and beyond, have the greatest impact on island communities with not much infrastructure and few resources.

In addition, Jamaica’s poor live mainly in rural areas. What income they make, from the crops they can grow, depends on the right weather and climate conditions. When the weather becomes dangerous and unpredictable, crops fail and whole communities suffer.

One of the biggest problems facing communities of rural poor is the lack of resources. Recovering from environmental events is difficult to impossible when people are barely making it from one day to the next. Jamaica’s ingrained cycle of poverty, generation after generation caught in the same trap, adds to the problem.

We can also see how the homeless are hit hardest by environmental problems. Without a home, people have no place to take shelter, no way to control their surroundings, no way to keep themselves and their families safe when the natural world turns dangerous.

At Creators of Hope, we want to help Jamaica’s most vulnerable break the cycle of poverty, and build the resources to protect themselves and control their surroundings in the face of changes in the natural world. We build homes to give people the opportunity of reliable shelter, a foundation that they can build on.
​
Learn more about us and consider donating to support our work building homes for Jamaica’s rural poor!